Camp Leader – Hugh Rundle is Manager Member Services at CAVAL by day, terrible JavaScript coder by night. He’s been on the VALA Committee since 2014, and is a co-founder of newCardigan. He was a Camp Leader at Tech Camp 2017 and had so much fun he’s back again for another one. Hugh is a big fan of controlled vocabularies and brutalist web design.

Camp Leader – Matthias Liffers is a librarian with a strong technological bent. He prefers to not send a human to do a machine’s work and believes strongly in automating as much as possible. He works at the Australian Research Data Commons on software skills projects for researchers and research support staff. Outside of work, he changes hobbies every few months and occasionally tweets about it at @mpfl, or posts mediocre photos as mpflx on Instagram.

Ebe Kartus has worked in a number of library environments on both sides of the fence. She has been a cataloguer for over 25 years and still dabbles but has a secret desire to be a coder, hopefully before she retires. She tries to play with geeky stuff whenever she can especially in her new job. She believes really strongly that Libraries should be part of the web not just be on the web. Her next big resource description adventure (still hopefully) will be with linked open data.

Alissa McCulloch is a librarian and bibliographic data wizard based in Canberra. She spends large amounts of time mangling metadata, usually for money but sometimes for fun. Believing that tech should work for us, and not the other way round, Alissa is keen to help those new to GLAM technology to get the most out of VALA Tech Camp. She tweets incessantly @lissertations and blogs at lissertations.net, and swears she has other interests besides cataloguing. Honestly. 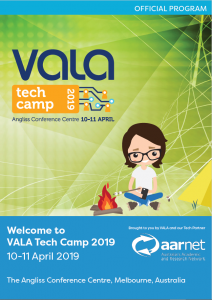