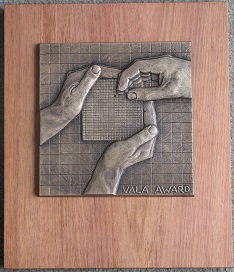 Open to all Libraries and Information Services in Australia, the biennial VALA Award recognizes outstanding and innovative use of ICT to improve service to customers.

The VALA Committee presents the VALA Award to the library or information service which has, in the opinion of the judging panel, made the most innovative use of information and/or communication technologies to improve service to customers. This could be either through the provision of new or upgraded services or facilities, or through improvements to operational systems.

All libraries and information services in Australia are eligible for nomination for the VALA Award.

Programs nominated for consideration will have been implemented since 1st October 2020 and may have been developed in-house or in a commercial partnership.

Nominations may be made by staff or customers of libraries or information services, or by other interested persons. Support in writing from the Chief Executive Officer of the nominated organisation must be included with the nomination.

Nominations on the form should outline:

a) The purpose or objectives of the innovation.

b) The demonstrated benefits of the innovation.

c) A description of the nominated innovation which includes;

i) The hardware and/or software implemented

ii) Features which make the system eligible for the award.

iii) The date on which the system was commissioned, and the length of time for which it has been operating.

d) The name of at least one person, who is not a direct beneficiary but who would be considered informed in this area, to whom the nomination may be referred for independent assessment.

Nominations and submissions for the 2022 VALA Award are NOW OPEN and must be received by 5.00pm AEDT on Monday 14 November 2022 via the online form.