The 2016 Williamson Award recipient does not have a traditional library career, but has invested the past 20 years making a significant difference in a number of library and cultural settings. 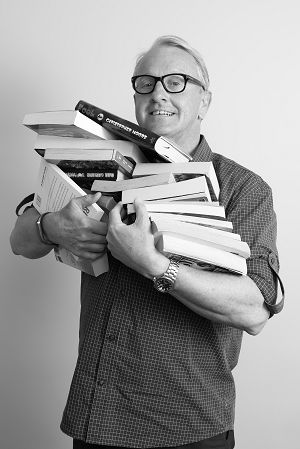 In 2006 he curated an exhibition which featured the innovative use of archival and library collections and forged strong relationships with overseas institutions for loans and promotion of the material. This exhibition attracted 250,000 visitors and remains one of the most successful temporary exhibitions of its kind.

He is a pioneer in the adoption and use of social media and new technologies, and instrumental in setting up the Institution’s blog, enabling staff to discuss their interests and stories and strengthening relationships with the public.

He is a trailblazer in the development of podcasts in Australian cultural institutions, where he was instrumental in the implementation and effective use of Twitter, Facebook and Flickr. This enabled access to the Institution and its collections through social media, and encouraged more visitations to exhibitions, public programs and the website.

Arguably, his greatest legacy at this institution is his work in digitising collections and making them available online. Digital preservation and access online continues today on the foundations of the work he established.

He has been recognized by his peers as an idea’s person and someone who has challenged many library sacred cows. As early as 2010 he started introducing Design Thinking methodologies at his University Library to co-create library services and empower staff at all levels in planning for the future.

Over the last few years his work has focused on being an advocate for openness and new models of scholarly publishing, and on pushing boundaries in Library design – moving beyond spaces and technology, and seeing the library as connecting people, culture and knowledge.

He is well known for generously sharing his thoughts about the role of libraries in society, and about the challenges we face, acknowledging that we have power as a profession to change things for the better. His blog is always thought-provoking and he is a highly sought-after speaker at international conferences.

He is an inspiration to many in the profession and well-respected even if he only occasionally wears a tie.

It is with great pleasure that the VALA Committee has unanimously endorsed Mal Booth as the 2016 Robert D. Williamson Award recipient.