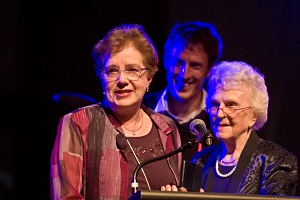 For more than thirty years the 2014 Williamson Award recipient has made an extraordinary and profound contribution to librarianship, especially in the area of library technology and innovation. This contribution has been felt across Australia and New Zealand, as well as across all library sectors. Indeed, the level of debate regarding library IT and innovation would be significantly less were it not for the tireless efforts of this year’s Williamson recipient. It is also worth noting that much of this work has been done with quiet efficiency and away from the spotlight. This year’s recipient also knew Robert Williamson and Bob would be delighted with the Committee’s choice.

The 2014 Williamson Award recipient has worked in a number of roles including as a systems librarian and as a library manager. The recipient has also worked across many library sectors. This broad and practical experience is the key to their successful contribution to the profession over many years. Starting in the State Library of Western Australia, the recipient moved across to Flinders University before heading up a number of government libraries in South Australia and then Victoria. The recipient then moved across to public libraries as a systems librarian. After the restructure of the Camberwell/Waverley Regional Library service the recipient moved into the school library sector before moving back to public libraries.

The recipient was active in the formation of VALA in the 1970s and has worked tirelessly to make VALA the important library IT forum it is today. VALA’s success is driven in part by the peer review process and a collegial engagement between both the library and the vendor community. That VALA can only accept 34% of the abstracts submitted, that the exhibition is now one of the largest of its kind in this region with vendors returning time and time again, is a credit to the dedication and professionalism of this year’s recipient.

Many people in this room, and countless people across Australia and New Zealand, have benefited from the time and effort this year’s recipient has dedicated to their VALA papers. Many of us now have a better understanding of how to structure a paper, cite a source, and when to use and not use a comma!

Many librarians who have volunteered on the VALA Committee and Programme Committees have benefited from the breadth and depth of this year’s recipient’s knowledge and memory. As VALA has prospered it has become bigger and more complex and adapted and changed to meet the changing needs of our library communities. Yet this year’s recipient has kept all the balls in the air and made it look effortless. We are here at this successful conference because of the many, many years of hard work and dedication that are the hallmarks of this year’s recipient.

It is with great pleasure that the VALA Committee has unanimously endorsed Alyson Kosina as the 2014 Robert D. Williamson Award recipient.