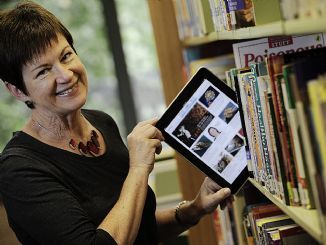 VALA’s most prestigious award is the Robert D. Williamson Award. This award is in memory of one of the early pioneers of our industry, Bob Williamson. This biennial award is also presented to an individual or organisation who or which, in the opinion of the judging panel, has made and is currently making an outstanding contribution to the development of information technology usage in Australian libraries and is positively and significantly influencing development in information technology usage within libraries.

Our recipient tonight has been a major contributor and innovator within the Australian library profession. Whilst never a “geek”, the recipient has a well-honed ability to identify and apply emerging technologies within library contexts.

This ability has resulted in the introduction of many firsts into Australian library management and service delivery. Some examples include:

The recipient has represented the Australian library profession on many international bodies, including the Bill & Melinda Gates Foundation, The Bertlesman Foundation and IFLA. The recipient has also made many contributions to the profession in National and Local contexts, including the Australian Library and Information Association, Public Libraries Victoria Network and VICLINK.

The recipient is highly respected, with a reputation as one who will engage, share and collaborate to forward the profession. This award publicly acknowledges multiple outstanding contributions to, and significant influences on, Australian libraries and their delivery platforms.

It is with great pleasure that I announce the winner of the Robert D. Williamson Award for 2012 is –