Topic: “What can we learn from measuring peace?” – an update 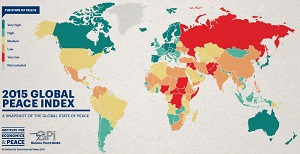 For those of you who attended the August 2015 VALA event entitled “What can we learn from measuring peace?”, the Institute for Economics and Peace has released the Global Peace Index 2016. This year, the IEP celebrates 10 years of measuring and analysing global levels of peace. Copies of past and present IEP reports can be found HERE.

About the Global Peace Index (GPI)

The GPI is the world’s leading measure of global peacefulness. Released annually since 2007, the Index gauges on-going domestic and international conflict, safety and security in society, and militarisation in 162 countries by taking into account 23 indicators. The 2015 edition of the GPI was released on 17 June at King’s College in London and at the UN Secretariat in New York City generating world-wide interest and media attention.