The 2013 VALA Student Award for a student at RMIT University goes to Penny Cook. 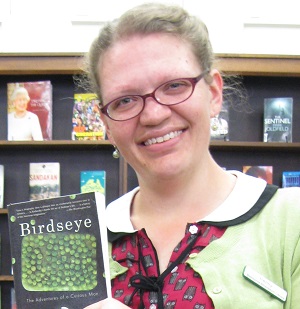 Penny Cook has just completed the Master of Information Management program at RMIT. She has the highest marks of all graduating students in the three major subjects which comprise the technology side of the program, with an average of over 90% in Information Organisation and Document Management parts 1 and 2. She has previously completed degrees in arts and science, majoring in linguistics, and atmosphere and ocean science, and has also worked as a baker. Penny says it’s quite a dramatic shift moving from baking to libraries, but she feels like she’s found where she belongs! She still loves baking as well as doing puzzles and also describes herself as a fairly lazy birdwatcher.

Penny is currently working in two jobs, as a school archivist at Emmanuel College, Altona, and as a librarian at the Melbourne Athenaeum Library. At the Athenaeum, as well as the usual circulation desk duties, she has also carried out some cataloguing projects, run an Australian classics book club, and she co-manages the library’s Facebook and Twitter presence. She also has an interest in special libraries which was strengthened during her industry placement last year at the Victorian Parliamentary Library.